Accordingly, There is diversity in religion. Religion is important to the Tibetans and has a strong influence over all aspects of their lives. There are  Buddhism  (which around  90 percent  of Tibetan people are practicing), Bon religion (first religion which we have in Tibet), and Muslims. In addition, you might be surprised that we have Christians in southeastern part of Tibet, which was started in 19th century. But most of people who come to Tibet for religious ceremonies are for Buddhism.

Nowadays  the major influence  is Tibetan Buddhism, a distinctive form of Mahayana and Vajrayana, which was introduced into Tibet from the Sanskrit Buddhist tradition of northern India. Like other countries which have their religious ceremonies and rituals on a specific period, there are kinds of rituals in tibetan Buddhism.

The fourth month  in Tibetan calendar (May or June in Solar Calendar) is well known as the "Buddhism month", also called the  Saga Dawa Festival  in Tibetan language. This month consists of when Lord Buddha was born, became a monk, died and enlightened and preached Buddhism to sentient beings. That’s why Tibetan Buddhists and also those who practice Buddhism consider that month as  a holy religious month .

In Tibet lots of Tibetan people  quit having meat  during that holy month because we believe that whatever good things you do in that holy month, you will gain more virtues than usual, and whatever bad things you do, you will also gain more sins than usual. During that month hundreds of Tibetan people circumambulate around the Barkhor, Tsekhor (Circuit around Potala) and Lingkhor (the biggest round including all minor temples, about 14km). They also  liberate fishes  into Lhasa River (Kyichu) and other animals according to their own budget. Some of them are used to liberating the same number of lifes according to their age.

In temples and monasteries, you will be able to see monks reciting prayer in the Assembly hall and serving butter tea during intermission. Hundreds of Tibetan people line up in Drepung Monastery for  making their donation  to the monks chanting prayers in assembly hall, and you will see the same scene in other monasteries. Most of Tibetan people are busy with visiting various monasteries with flask full of butter in their hand for butter lamp. Most of them carry lots of small change for offering in monasteries and also for beggars. During that month you will see many beggars in Lhasa.

During this Buddhism month, lots of Tibetan people who are willing to make a pilgrimage will  trek to Mt. Kailash . On  the 15th day  of that Tibetan month, you will be able to see the ceremony of erecting of prayer flag pole. You can also start your treking after the ceremony as lots of people will do it. You will have a precious memory if you can worship the Holy Mountain accompanied by the Tibetan local pilgrims.

Besides, lots of Indians will also be there. They come to worship the God Shiva. If you are practicing Hindu, it is also a really great time to come to visit Kailash.

When is the best time to visit Tibet? We may get different views from different person because Tibet is such an attractive place for lot of people, presenting
Medicine for High Altitude Illness

“Oh, I really want to travel to Tibet with all my family. But, I do worry about the high altitude illness”. One of my friends said so. In fact, man
Tibet Permit Without Tour

After March 14, 2008 when a series of riots, protests, and demonstrations took place in Lhasa, local government implements more strict regulations on tourism i
Myth about Tibetan evolution 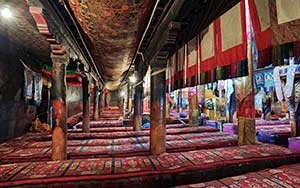 Myth believe Tibetans were decent from a monkey and a rock-ogress, it was in a cave on the Gonpo Ri hill in Yarlong valley Tsedang(Southern Tibet), the sublime
What to Pack for a Tibet Tour(1)

Tibet tour is the dream of many travelers. It is also a mystery to travelers who have never been there. To have a nice and safe trip in such a high altitude ar
How To Plan Tibet Tour

Planning a mediocre travel tour is an easy job but planning a satisfying tour is what makes our job so challenging and specialized. Not only will we trek thro