Potala Palace was the chief residence of the Dalai Lama until the 14th Dalai Lama fled to India during the 1959 Tibetan uprising. It is now a museum and UNESCO World Heritage Site.

The site on which the Potala Palace rises is built over a palace erected by Songtsän Gampo on the Red Hill. The Potala contains two chapels on its the northwest corner that conserve parts of the original building. One is the Phakpa Lhakhang, the other the Chogyel Drupuk, a recessed cavern identified as Songtsän Gampo's meditation cave.

The White Palace or Potrang Karpo is the part of the Potala Palace that makes up the living quarters of the Dalai Lama. The first White Palace was built during the lifetime of the Fifth Dalai Lama and he and his government moved into it in 1649.

The Red Palace or Potrang Marpo is part of the Potala palace that is completely devoted to religious study and Buddhist prayer. It consists of a complicated layout of many different halls, chapels and libraries on many different levels with a complex array of smaller galleries and winding passages. 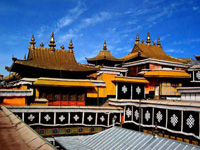 Included on UNESCO's World Heritage list in 2000 as part of the Potala Palace , the Jokhang Temple is located in central Lhasa. With an area of 25,100 square meters (about six acres), it is the ultimate pilgrimage destination for Tibetan Pilgrims.
Sera Monastery

Sera Monastery in the northern suburbs of Lhasa-the representative monastery of the Gelugpa of the Tibetan Buddhism. Sera Monastery developed over the centuries as a renowned place of scholarly learning, training hundreds of scholars, many of whom have attained fame in the Buddhist nations.
Drepung Monastery 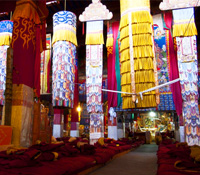 Drepung Monastery (literally “Rice Heap” monastery) lies in west of Lhasa under Mt. Gambo Utse. Built in 1416, it is considered as one of the largest monasteries in the six principle monasteries of Gelu Sect. Drepung was known for the high standards of its academic study.
Norbulinka Summer Palace

The Norbulingka, meaning Jewel Park, lies three kilometers (two miles) west of the Potala, built from 1755. It served as the traditional summer residence of the successive Dalai Lamas from the 1780's up until the 14th Dalai Lama's exile in 1959. Part of the "Historic Ensemble of the Potala Palace", Norbulingka is recognized as a UNESCO World Heritage Site.
Ganden Monastery 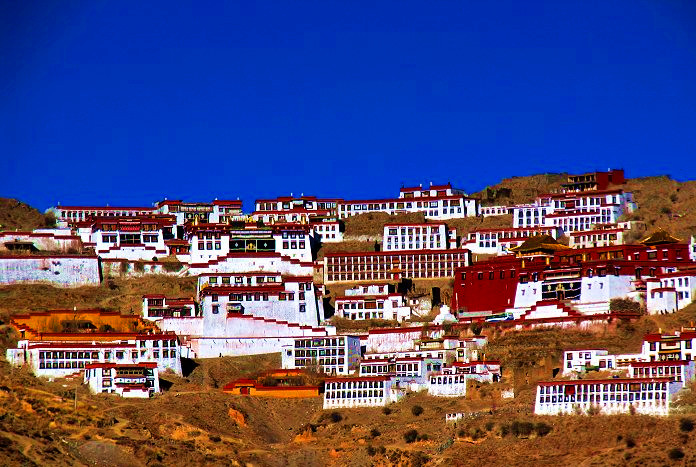 Ganden Monastery is one of the 'great three' Gelukpa university monasteries of Tibet, located at the top of Wangbur Mountain, Tagtse County, 36 kilometers from the Potala Palace in Lhasa, at an altitude of 4,300m. Its full name is Ganden Namgyal Ling. Ganden means "joyful" and is the Tibetan name for Tuṣita, the heaven where the bodhisattva Maitreya is said to reside. Namgyal Ling means "victorious temple".
Barkhor Street

Barkhor is an area of narrow streets and a public square in the old part of the city located around Jokhang Temple and was the most popular devotional circumambulation for pilgrims and locals. The one-kilometer-long street's path is deep, silent along with Tibetan style architecture that filled the air with profound ancient culture. About 6,000 people are now living along Barkhor Street. Business is quite busy here and tourists at home and abroad are curiously searching exotic stuffs.