The solo show debuts of Thangka master’s at National Museum 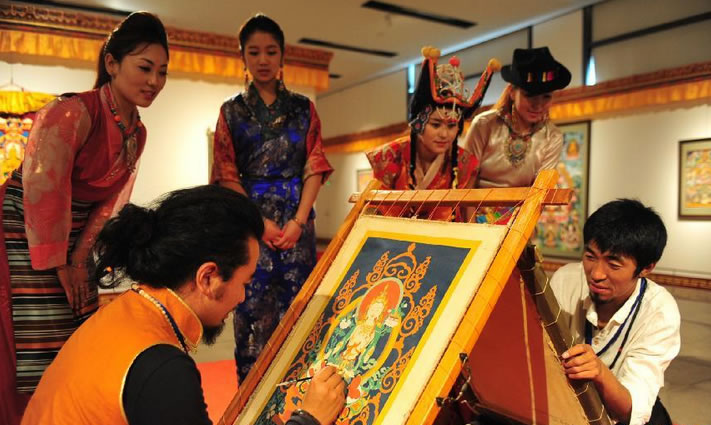 BEIJING,April 16(China Tibet Online)-The solo  exhibition of a Thangka master from Huangnan Tibetan Autonomous Prefecture of northwest China’s Qinghai Province was opened at the National Museum of China on April 16, 2014.

Niangben is Master of Chinese Arts and Crafts and representative heir of the national intangible cultural heritage specialized in the Regong style Thangka.

"I am very honored today to have my Thangka works exhibited at the national level museum. I think the exhibition is a good start to promote Thangka to the world. I will do my best to achieve this goal," said Niangben.

Niangbo also expressed his sincere thanks in his speech to the Communist Party of China and the government for their great support to the protection and development of Thangka over the years. "Without their support, I could never have made such achievements."

Cao Ping, deputy director-general of the Culture, News and Press Department of Qinghai People’s Government said in her speech that in the recent years, the Qinghai provincial government has attached great importance to the protection of the unique Tibetan culture as well as the intangible cultural heritage. She also spoke highly of the great contributions Niangben has made to the preservation of Thangka. Niangben has traveled to many countries including Australia, Germany, France, Holland and Korea to promote the traditional art treasure.

And the Thangka show will be shown in the United Nations this May, according to Niangben. "Thangka is the art treasure of China as well as the world," he said.

Lv Zhangshen, curator of the National Museum said in his addresses that Thangka, with more than 1,000 years of development, has become the carrier of Tibetan religion, history, technology and art. Altogether 65 pieces of the Regong style Thangka created by Niangben, and mineral paints and tools used for making Thangka are put on show. Brief accounts of Tibetan Buddhism and field surveys of Thangka techniques are also displayed in order to bring this time-honored art closer to viewers.

Thangka is a unique art form of ethnic Tibetans. The Regong school of Thangka features bright colors compared to that of the Tibet Autonomous Region. In 2006, Thangka has been listed in the first batch of the national intangible cultural heritage, and in 2009, the Regong school of Thangka was also listed in the Intangible Cultural Heritage by UNESCO.

The exhibition was jointly organized by the National Museum of China and the Culture, News and Press Department of Qinghai Provincial Government. Leaders of the Ministry of Culture and other art organizations attended the opening ceremony.

The exhibition will last from April 16 to May 13 at the National Museum of China located in the center of Beijing.

Nyingchi Peach Blossom Festival-22 March 2020 The Nyingchi Peach Blossom Festival this year is confirmed as March 22, 2020. And the venue for opening ceremony is still in Gala Village, which is 17 km from Bayi Town, the city center of Nyingchi.
Nyingchi Railway Station will be open in October 2021 The whole construction project of Nyingchi Railway Station was expected to be completed and open in October 2021, the China Tibet News reported on December 31, 2019.

After the completion of the project, Nyingchi Railway Station will be Tibet’s third prefecture-level railway station providing passenger and freight service, after the regional capital Lhasa and the regional second largest city Shigatse.
Butter Lamp Festival 2019 and the 600th Anniversary of the Parinirvana of Tsongkhapa On December 21, 2019, befell Tibet’s Butter Lamp Festival, which is held annually to commemorate the parinirvana of Tsongkhapa, on the Tibetan Lunar calendar’s October 25.
Lhasa- Nyingchi highway to open by the end of July The high-grade highway between Lhasa and Nyingchi is expected to open by the end of July, 2015.
Tibet Airlines to open two new air routes Tibet Airlines will begin operating two new air routes linking Lhasa with Shenzhen and Changsha in China.
Everest Base Camp to Reopen Mt Everest Base Camp in Tibet will reopen to tourists on July 1st, according to local tourism authorities.