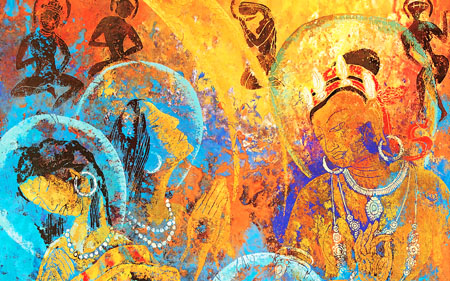 As with other types of Tibetan art, painting is very symbolic and can be interpreted on many different levels. It is almost exclusively devotional in nature.

Tibetan mural painting was strongly influenced by Indian, Newari and, in the far West, Kashmiri painting styles, with later influence coming from China. Paintings usually followed stereotypical forms with a central Buddhist deity surrounded by smaller, lesser deities and emanations. The use of colour and proportion is decided purely by convention and rigid symbolism. Later came depiction of revered Tibetan lamas or Indian spiritual teachers, often surrounded by lineage lines or incidents from the lama’s life.

Tangka is a transliteration from a Tibetan word, sometimes called “Tangha.” It refers to the picture scroll mounted on colourful satin. It is a unique kind of painting in Tibet. It is usually vertically long, with no certain size. The picture is first drawn on a white cloth, then it will be stretched with a frame, pasted, polished, sketched with threads and painted. After that, the picture will be edged with colourful satins and mounted on a cotton or silken cloth. In the front, two pieces of yellow silk bands and two ribbons will be added to be curtain and streamers. Hard wood scrolls are then added to the top and low ends of the picture. A tangka is finished. According to its material and craftsmanship, tangka divided into three kinds: Painting tangka, tetile tangka and printed tangka. The embroidered tangka, brocade tangka (jiandui), tapestry tangka, applique tangka and pearl tangka are especially valuable. 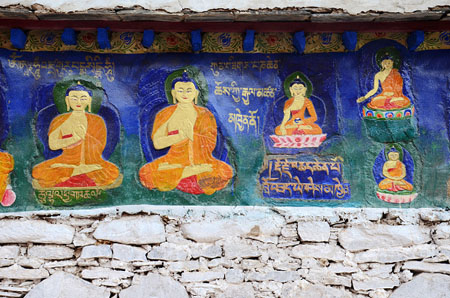 Some masks in Tibetan art also belong to sculpture, such as the wood, bronze and clay masks.

Tibetan Opera develops from Tibetan dances. It is one of the oldest traditional operas on Tibet stage and a gem of Tibetan traditional art treasure house. The subjects often come from folk legends or religious stories of Tibet. The traditional plays are “Eight Tibetan Operas.” In performing, actors and actresses need to sing, speak and dance, while the singing is either in chorus or solo. The performers are dressed in colourful costumes and wear various specially-made masks and props. The Tibetan Opera has a lot of facial masks, each with a different meaning. The white and blue masks signify two Tibetan Opera classes. The traditional Tibetan Opera has no strict requirement about performing site and can be performed anywhere. On each festival, the Tibetan Opera will be performed. The Tibetan Opera performance has become an important part of the Shoton Festival in Lhasa. Today with more plays, more mature performance and improved stage effect and application of sound, light and electricity technologies, the Tibetan Opera is attracting more and more people. Many Tibetan plays newly edited or adapted are deeply loved not only by Tibetans themselves but also by overseas audiences.

Ballad-singing is popular among Tibetans. It can be performed by one man or more than two persons. Sometimes it is accompanied with musical instruments. The longest heroic epic in the world, “King Gesar”,  was handed down from one generation to another by ballad-singning. “King Gesar” has been created successively since the 11 th  century, forming a group of heroic images headed by “King Gesar” who fought bravely and wisely against evil forces. The epic boasts a long story, unusual plots, beatuful language and clear themes. It also truly recorded the scenes of social life of ancient Tibetans. The epic is deeply loved by Tibetans. There are special balladeers or manuscripts of the epic around Tibet.

The early monasteries were built in relatively densely-populated areas, while the later ones were set up on precipitous cliffs or between steep rocks, showing different styles. Small monasteries are sparely furnished, but formal monasteries are usually composed of a sutra hall, Buddha hall, monks’ residential areas and houses of Living Buddhas. Most of them have flat roofs. Meanwhile, the magnificent palaces such as the Potala Palace and famous monasteries have gable of hipped gilded roofs. They shine brightly under the sun. The gold roofs are often decorated with bronze bird, precious bottle, golden deer and Dharma, with male goat of fish head sitting at four corners. Down from them will be hung bronze or iron bells, which clash to make pleasant sounds. The sutra and Buddha halls are usually high watchtowers, with bronze or wood prayer wheels in the front gate.